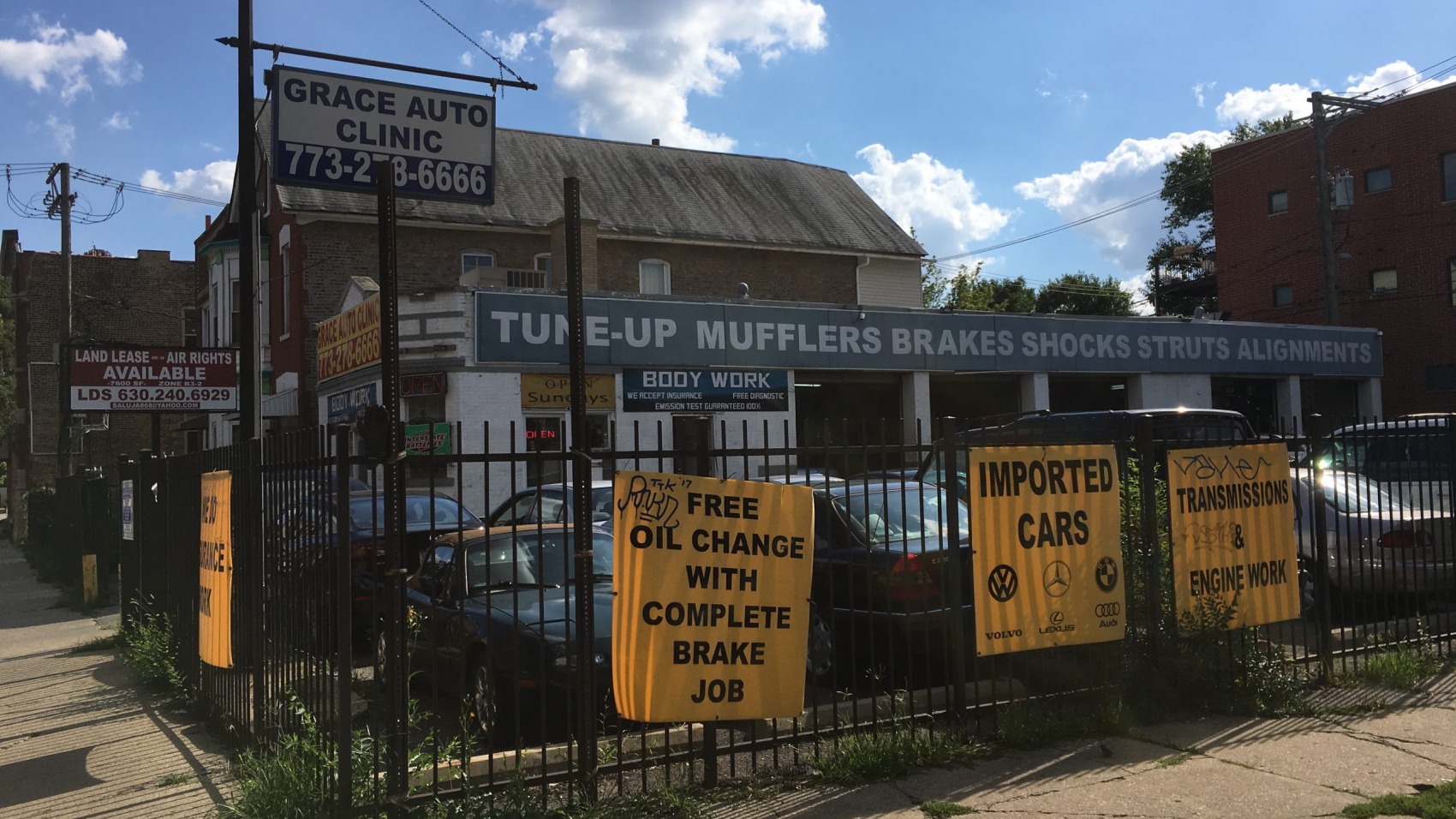 This story has been updated with more details below from a restaurant co-owner.

Big Star won’t be the only restaurant on Damen Avenue with a large patio if plans to open a new burger bar go through for 820 N. Damen Ave. A Cleveland-based group wants to convert Grace Auto Clinic into a new restaurant/bar with milkshakes, burgers, and pizza. The plan was discussed last week at an East Village Association board meeting, as reported on its website.

A rendering shows the name “Shake-It,” but it’s unclear if that’s a working name. (See the update below) The image also shows a pick-up window and plenty of covered, outdoor seating. The dining room would have room for 79 with another 80 seats outdoors. Add in standing-room occupents, and there’s room for about 200, according to the proposal. The owner wants to also keep it family friendly with an “extensive” children’s menu. They also intend to serve weekend brunch. Details are few, but the music looks like it will feature lots of Motown.

The restaurant’s operators, Forward Entertainment Group, weren’t immediately reached for comment. Their Facebook page mentions a forthcoming “exciting 2017 Chicago project” They’re new to the Chicago market, but have restaurants in Ohio and Colorado.

Will this new bar help cut down the long waits for a patio seat at Big Star, located less than a mile north? Check back later for more details about the project.

UPDATE: One of the co-owners, Dante Deiana, called back with a flood of new details on the project. Shake-It is the permanent name for the restaurant, and if all goes well they’ll open “on the first warm day of next year.” Deiana has lived in Chicago for 16 years, and was part of a group that had plans to open a restaurant in 2007 in the current Celeste space in River North. Deiana’s been itching to open a restaurant in Chicago. Forward Entertainment Group run two clubs in Cleveland, FWD Day + Nightclub and Magnolia.

“I’ve been getting sick of having to go back and forth to Cleveland every other week,” Deiana said.

Shake-It will feature 20 shakes, including spiked flavors with alcohol. The menu will include rotisserie chicken, burgers, salads, wood-fired pizzas, and griddled burgers. One of Forward’s partners runs Flipside Burgers, a chain with six locations in Ohio and one in Colorado. Some of Shake-It’s inspiration comes from them.

As far as the Big Star comparisons, Deiana said that came from a residents at the neighborhood board meeting. The patio’s size may be similar, but he wants to keep the spot more family friendly. When Chicago’s temperature drops, the outdoor area will be repurposed. Fall will see more of a Halloween feel with a pumpkin patch. They may sell Christmas trees during the winter.

The Motown theme comes from the auto repair shop, Deiana said. They wanted to keep a bit of the old with a reference to the Motor City in Detroit.